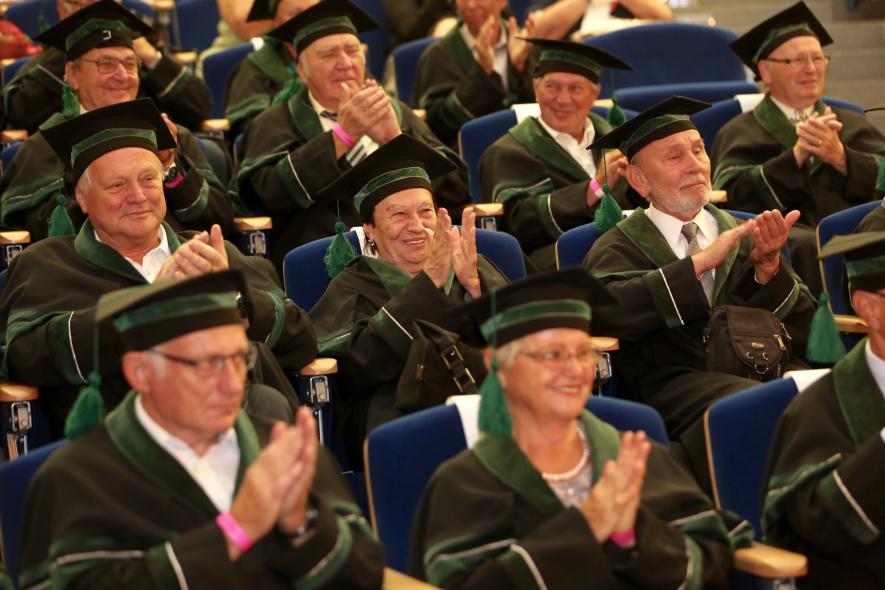 This year’s September was marked by several festivities at VŠB-TUO. On Friday, September 18th, the Golden Graduation took place and gathered alumni who graduated in 1965.

Golden Graduation was followed by unveiling (in memoriam) the imprint of Professor Karel Mazanec on the university walk of fame.

More than a hundred graduates that studied at the Faculties of Metallurgy, of Mechanical Engineering and of Mining and Geology met at the Golden Graduation after 50 years. The event was held in the university aula with the presence of the Rector and other university management. The jubilees wore robes and got commemorative medals. They also had the chance to have a tour round the campus, see new classrooms and laboratories as well as newly renovated planetarium.

The whole day program was highlighted by the unveiling of the imprint of Professor Karel Mazanec on the walk of fame that had been established in front of the Rectorate last year.

The bronze casting of the imprint was added to the trace of Jan Světlík, chairman of the board and General Director of the Vítkovice Holding, a.s. Company as well as a well-known benefactor of modern art, philanthropist and primarily a big Ostrava patriot.

Placing the imprint on the walk of fame is a great honor therefore every year there will be only one added to the existing ones.