VSB-TUO was part of the Retro Mobile exhibition in Paris 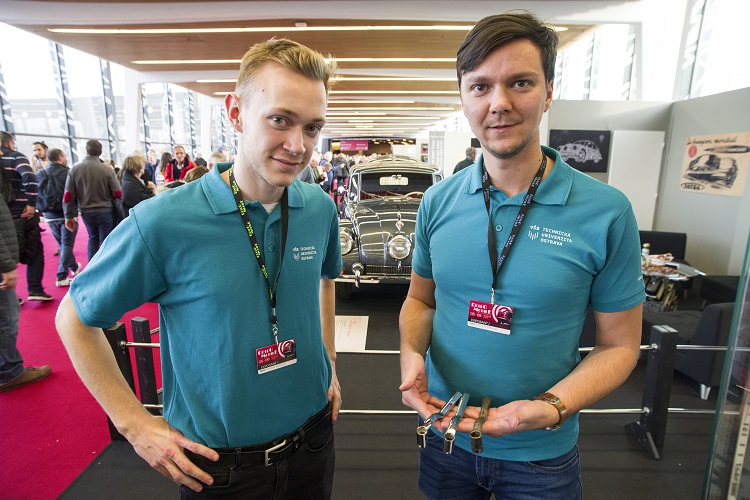 The interest in the display was enormous. Lukáš Kudrna from the Department of Production Machines and Design visited the exhibition last year as a guest. This year, however, an offer came from colleagues from the Kopřivnice company engaged in the restoration of classic vehicles and constructing prototypes. “We exhibited parts we produced for the Tatra 87 passenger car. It was an ashtray, gearshift knob, sunroof opening handle, and outside door handles we made in the cooperation with the PROTOLAB department and the Department of Metallurgy and Foundry of the Faculty of Materials Technology,” says Lukáš Kudrna. One pair of door handles was made by 3D printing in stainless steel. The other pair was made by casting from grey cast iron. Except for surface treatments, the so-called chrome plating, everything was designed and manufactured at VSB – Technical University of Ostrava.

Professional visitors were most interested in Tatra 77 and Tatra 87. They are interesting due to their concept and aerodynamic body. “The vehicle has an eight-cylinder engine mounted behind the rear axle. As far as the bodywork is concerned, it was exceptional at the time of its creation,” adds the young scientist. Tatra has chosen its own path, and even today, you cannot mistake it for any other brand. It is highly prized by collectors from all over the world. “Without exaggeration, we can say that Tatra has the best name among all Czech car manufacturers in terms of collecting.” Collectors from the United States, France, England, Ireland, the Netherlands or Poland stopped at the stand and admired the exhibited vehicles. The President of the FIVA (International Federation of Historic Vehicles), Tiddo Bresters and Rudi Mattoni also came to the stand.

The lay public was most interested in where the Tatras have been produced, why the vehicle has three headlights, and whether the brand still exists. Questions were also related to the comparison of the handles already mentioned. “We also presented the entire Reverse Engineering process, from original parts to semi-finished products and the final product. The visitor learned about the production process for such parts,” adds Lukáš Kudrna. People liked the fact that such a thing exists at a university; they considered the preservation of the cultural heritage in this form a very useful step for the future.

Besides the experience, Lukáš Kudrna and Daniel Kaminský, a student of the 2nd year of the Faculty of Mechanical Engineering, have acquired a lot of contacts and the possibility of future cooperation. “We have negotiated cooperation at home and abroad – for example, in France and Germany. In the near future, the project of constructing a functional replica of the Tatra vehicle will start,” they explain. The vehicle was made only in one prototype and is considered the forerunner of the VW Beetle. It will be made for the museum in Nashville, USA, and the Faculty of Mechanical Engineering will be involved. A lecture with Mr. Pavel Malaník has been pre-arranged. Mr. Malaník is the designer and owner of the Torpedo V4 (1909) and NGL 1909 J. A. P., which he designed and produced according to surviving photographs – he breathed life into machines that no longer exist. The lecture is scheduled for the beginning of June and will include a demonstration.