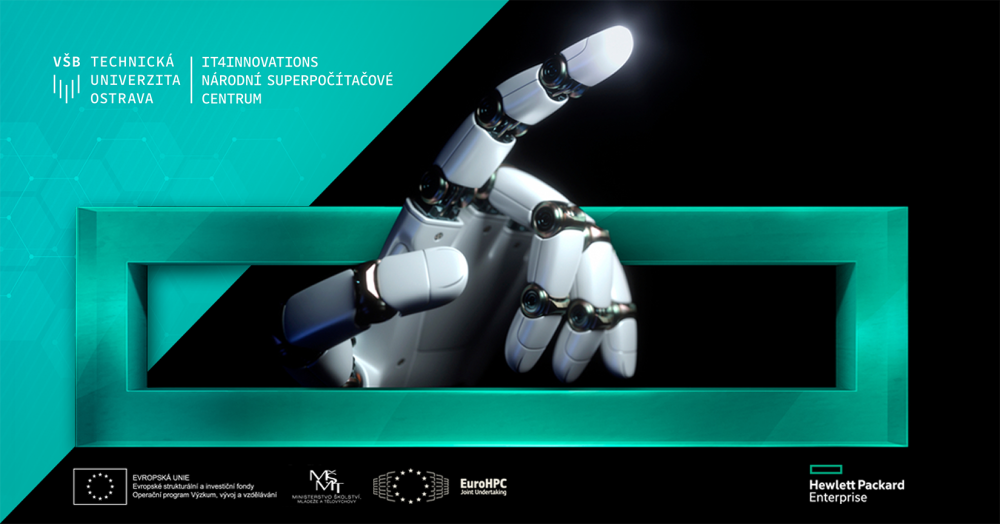 The contract was signed between the European High Performance Computing Joint Undertaking (EuroHPC JU), Hewlett Packard Enterprise, which will deliver the system, and IT4Innovations National Supercomputing Center VSB at Technical University of Ostrava, where the new supercomputer will be located. The supercomputer will serve both academia and industry.

In the spring of 2019, IT4Innovations National Supercomputing Center achieved success with their project titled IT4Innovations Centre for European Science and Industry in a pan-European competition to host a European petascale supercomputing system, which will be built under the EuroHPC JU. A public procurement procedure to select the economic operator to supply the system was commenced, from which Hewlett Packard Enterprise emerged as the winner, becoming the supplier of the system with a theoretical peak performance of 15.2 PFlop/s. The signing of the contract between EuroHPC JU, VSB – Technical University of Ostrava, and Hewlett Packard Enterprise took place on October 2, 2020. The cost of the procured system will total almost EUR 15 million, 35 %, i.e.  EUR 5.13 million, of which will be paid by the EuroHPC JU. The remaining costs amounting to EUR 9.73 million will be funded using the resources of the European Structural and Investment Funds through the Operational Programme Research, Development and Education (OP RDE). The installation and launching of this unique computing system are planned for the first quarter of 2021, and its service to science, industry, and society is planned to be provided until 2025. Its total operating costs between 2021 and 2025 are estimated at EUR 14 million.

"IT4Innovations has long established itself as a leading research, development, and innovation centre in the field of high-performance computing, data analysis, and artificial intelligence with excellent reputation across Europe. I believe that by procuring this system, the position of IT4Innovations as a major European supercomputing centre will be further consolidated, while at the same time bringing our university interesting projects from both its in-house and external users from academia and industry," said Václav Snášel, the Rector of VSB – Technical University of Ostrava.

Anders Dam Jensen, the Executive Director of the EuroHPC JU added: “This new world-class supercomputer, located in the Czech Republic will benefit Europe as a whole and will bring us one step closer to our ambition of making Europe a global leader in high performance computing. Its computing power will be accessible to European public, scientific and industrial users wherever they are in Europe, for instance to improve weather predictions, develop greener energy infrastructures or adapt therapies to the specific needs of a patient.”

The supercomputer with working title EURO_IT4I will achieve a theoretical peak performance of 15.2 PFlop/s, thus becoming the most powerful supercomputer in the Czech Republic with an ambition to rank 10th in Europe and 50th in the world. It will thus exceed the performance of Salomon, the most powerful supercomputer at IT4Innovations to date, with a peak performance of 2 PFlop/s, reached many times. It is certainly worth noting that the accelerated part of the supercomputer, which will be made up of HPE Apollo 6500 servers with a total of 560 NVIDIA A100 Tensor Core GPUs  that provide, among other things, a theoretical peak performance for artificial intelligence calculations of up to 175 PFlop/s. The supercomputer will be interconnected with NVIDIA Mellanox HDR 200Gb/s InfiniBand, delivering extremely low latency, and smart in-network computing acceleration engines. With NVIDIA GPU acceleration and smart InfiniBand offload engines, the new system will be perfectly prepared to handle very demanding, computationally intensive tasks in the fields of machine learning and artificial intelligence, which are delivering scientific breakthroughs across the globe.

"I must admit that I am proud of the fact that through the supply of technology developed by our company, we can contribute to the Czech Republic's further development in progressive areas such as machine learning, artificial intelligence, and advanced big data analysis," said Jan Kameníček, Managing Director of Hewlett Packard Enterprise for the Czech Republic. "The proposed solution is built on HPE's unique technologies in combination with those developed by SGI and Cray, whose acquisitions have enabled HPE to expand massively on the market and develop a portfolio of products and services in the field of high-performance computing and supercomputing. The implementation of this project will also allow us to further strengthen our top local team, which is both dedicated to the field of supercomputing and unique in the context of Central and Eastern Europe," adds Kameníček.

"Our users' demands for computational resources are growing every year, and we have not been able to fully meet them anymore. This brand-new supercomputer is designed to fully cover user requirements in solving complex scientific and industrial problems involving, for example, classical numerical simulations, large-scale data analysis, and the use of artificial intelligence," adds Vít Vondrák, the Managing Director of IT4Innovations National Supercomputing Center.

The name of the new supercomputer will be selected as part of a public competition that everyone with permanent residency in the Czech Republic can participate in, and it will last until December 15, 2020. For more about the competition, see http://bit.ly/pojmenujsuperpocitac.

The new supercomputer shall reach a theoretical peak performance of 15.2 PFlop/s, which corresponds to 15.2 quadrillion floating-point operations per second.

The supercomputer will consist of 6 main parts:

a universal part for standard numerical simulations, which will consist of approximately 720 computer servers with a theoretical peak performance of 3.8 PFlop/s,
an accelerated part with 70 servers and each of them being equipped with 8 GPU accelerators providing a performance of 11 PFlop/s for standard HPC simulations and up to 150 PFlop/s for artificial intelligence computations,
a part designated for large dataset processing that will provide a shared memory of as high as 24 TB, and a performance of 74 TFlop/s,
36 servers with a performance of 131 TFlop/s will be dedicated for providing cloud services,
a high-speed network to connect all parts as well as individual servers at a speed of up to 200 Gb/s,
data storages that will provide space for more than 1 PB of user data and will also include high-speed data storage with a speed of 1 TB/s for simulations as well as computations in the fields of advanced data analysis and artificial intelligence.

The procurement of the EuroHPC supercomputer is funded by the OP RDE project entitled IT4Innovations national supercomputing center – path to exascale, project ID: CZ.02.1.01/0.0/0.0/16_013/0001791. The procurement and operation of the EuroHPC supercomputer is jointly funded by EuroHPC JU, through the European Union Connecting Europe Facility and the Horizon 2020 research and innovation programme, as well as the Czech Republic.

IT4Innovations National Supercomputing Center at VSB – Technical University of Ostrava is a leading research, development, and innovation centre active in the field of high-performance computing (HPC) and data analysis (HPDA). IT4Innovations operates the most powerful supercomputing systems in the Czech Republic, which are provided to Czech and foreign research teams from both academia and industry. Together with the CESNET and CERIT-SC institutions, IT4Innovations constitutes e-INFRA CZ, a strategic research infrastructure of the Czech Republic. It currently operates three supercomputers — Anselm (launched in the summer of 2013, 94 TFlop/s), Salomon (launched in the summer of 2015, 2 PFlop/s), Barbora (launched in the autumn of 2019, 849 TFlop/s), and NVIDIA DGX-2, a specialized system for artificial intelligence calculations (launched in the spring of 2019, 130 TFlop/s ando 2 PFlop/s in AI). In 2021, a petascale system entitled EURO_IT4I with a theoretical peak performance of about 15.2 PFlop/s is to be launched within the EuroHPC Joint Undertaking project. The key research areas of IT4Innovations include big data processing and analysis, machine learning, development of parallel scalable algorithms, solution of computationally demanding engineering problems, advanced visualization, virtual reality, modelling for nanotechnologies, and material design.  For more information, see www.it4i.cz.

The European High-Performance Computing Joint Undertaking (EuroHPC JU) is a legal and funding entity, created in 2018 and located in Luxembourg. The EuroHPC Joint Undertaking allows the EU and EuroHPC participating countries to coordinate their efforts and pool their resources with the objective of deploying in Europe world-class exascale supercomputers, able to perform more than one trillion operations per second and developing innovative supercomputing technologies and applications. By making Europe a world leader in high performance computing (HPC), the EuroHPC JU seeks to provide computing solutions, improving cooperation in advanced scientific research, boosting industrial competitiveness, and ensuring European technological and digital autonomy. For more information, visit: https://eurohpc-ju.europa.eu/

Hewlett Packard Enterprise is a global company providing IT services, implementations, and consulting to help companies streamline their business by using IT solutions and the value of their collected data as much as possible. HPE builds on decades of development and innovation to offer the best opportunities for companies to do business. HPE provides unique solutions with years of experience in cloud platforms and end-point IT processing that help customers develop new business models and ultimately increase their operational performance. For more information, visit: www.hpe.com