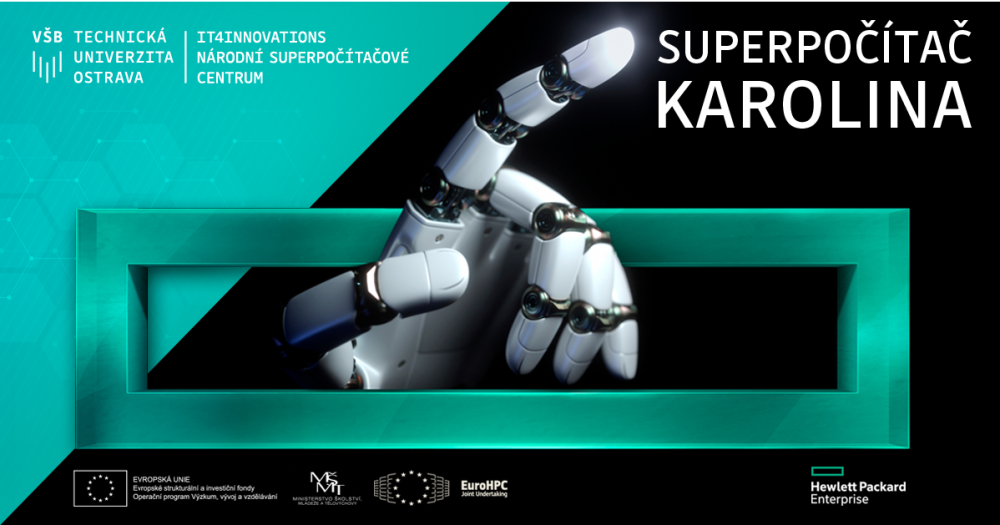 In the final quarter of last year there was a competition to name the most powerful supercomputer in the Czech Republic, which will be installed at IT4Innovations National Supercomputing Center in Ostrava this year. From more than 5,000 submissions sent by over 2,000 people, the name KAROLINA was selected by the jury.

It is an established tradition that the names for the supercomputers operated at IT4Innovations National Supercomputing Center in Ostrava are chosen by the public. This was the case with Anselm, Salomon, and Barbora, and the names reflect the strong mining tradition and industrial history of the Moravian-Silesian Region.

The public competition to name the new supercomputer was launched in October last year. In total, 5,114 proposals were received in two months, with over 2,000 people voting. From the proposals received, 3 winners were selected who will receive valuable prizes from Hewlett Packard Enterprise, which will deliver the supercomputer Karolina. Among the most frequently nominated names were those of mythical or fictional persons (Golem, Bivoj, Cimrman, Perun or Sheldon), well-known scientists and thinkers (Amos, Albert), and places and former mines in the Moravian-Silesian Region (Ema, Landek, Odra, Karolina). The 10-member jury thus faced the daunting task of selecting a name that would be original, concise, one-word, well-spoken in both Czech and English, and composed of four to eight letters that would not contain special characters or diacritics.

"In the past, names relating to the Moravian-Silesian Region have always been chosen, and I am personally pleased that the tradition in Karolina's case has been observed. The name Karolina refers to another of the Ostrava-Karviná mines, which was named by Salomon Rothschild after his wife Caroline. Indeed, the Karolina coking plant that stood in the very centre of Ostrava until the 1980s is still vividly remembered by many of us, and is inextricably linked to Ostrava," says Vít Vondrák, the IT4Innovations Managing Director. "I believe that the Karolina supercomputer, which has the best prospects to rank among the 50 most powerful supercomputers in the world, will build a great reputation through being accessible not only to Czech but also to European scientific and industrial users," adds Vondrák.

The Karolina supercomputer will achieve a theoretical peak performance of 15.2 PFlop/s, becoming the most powerful supercomputer in the Czech Republic with the ambition to rank 10th in Europe and 50th in the world. The installation and launch of this unique computing system is already underway to make it fully operational in the first half of 2021. It’s service to science, industry, and society is expected to run to the year 2025.

The procurement of the EuroHPC supercomputer is funded by the OP RDE project entitled IT4Innovations National Supercomputing Center – Path to exascale, project ID: CZ.02.1.01/0.0/0.0/16_013/0001791. The procurement and operation of the EuroHPC supercomputer is jointly funded by EuroHPC JU, through the European Union Connecting Europe Facility and the Horizon 2020 research and innovation programme, as well as the Czech Republic.