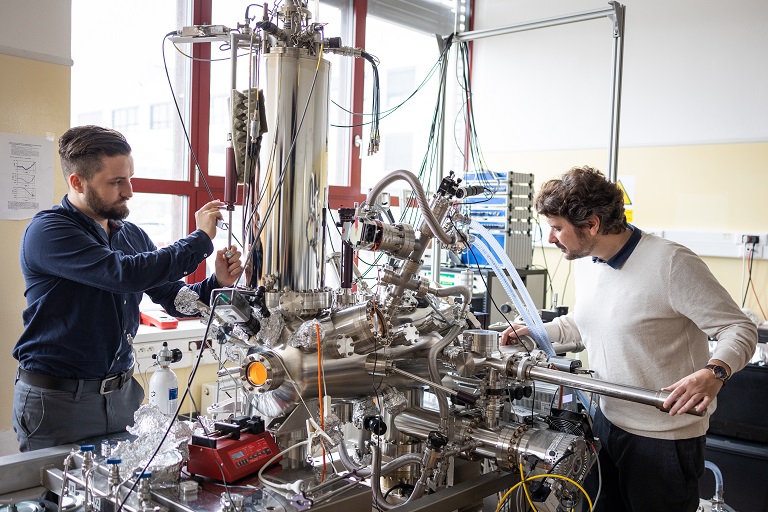 Until now, observing subatomic structures was beyond the resolution capabilities of direct imaging methods, and this seemed unlikely to change. Czech scientists, however, have presented a method with which they became the first in the world to observe an inhomogeneous electron charge distribution around a halogen atom, thus confirming the existence of a phenomenon that had been theoretically predicted but never directly observed.

Comparable to the first observation of a black hole, the breakthrough will facilitate understanding of interactions between individual atoms or molecules as well as of chemical reactions, and it opens a path to refinement of the material and structural properties of various physical, biological, and chemical systems. The breakthrough was published in Science.

In an extensive interdisciplinary collaboration, scientists from the Czech Advanced Technology and Research Institute (CATRIN) of Palacký University Olomouc, the Institute of Physics of the Czech Academy of Sciences (FZU), the Institute of Organic Chemistry and Biochemistry of the Czech Academy of Sciences (IOCB Prague), and the IT4Inovations Supercomputing Center at VSB – Technical University of Ostrava have succeeded in dramatically increasing the resolution capabilities of scanning microscopy, which several years ago enabled humankind to image individual atoms, and have thus moved beyond the atomic level to subatomic phenomena. The scientists have, for the very first time, directly observed an asymmetric electron density distribution on single atoms of halogen elements, the so-called sigma-hole. In doing so, they have definitively confirmed its existence, theoretically predicted some 30 years ago, and have overcome one of science’s longstanding challenges.

“Confirming the existence of the theoretically predicted sigma-holes is not unlike observing black holes, which had never been seen until only two years ago despite being predicted in 1915 by the general theory of relativity. Viewed in that sense, it’s not much of an exaggeration to say that the imaging of the sigma-hole represents a similar milestone at the atomic level,” explains Pavel Jelínek of FZU and CATRIN, a leading expert on the theoretical and experimental study of the physical and chemical properties of molecular structures on the surface of solid substances.

Until now, the existence of the phenomenon known as a sigma-hole had been indirectly demonstrated by X-ray crystal structures with a halogen bond, which revealed the surprising reality that chemically bonded halogen atoms of one molecule and nitrogen or oxygen atoms of a second molecule, which should repel one another, are in proximity and thus attract one another. This observation was in blatant contradiction with the premise that these atoms carry a homogenous negative charge and repel each other through electrostatic force.

This led the scientists to examine the subatomic structure of halogen using Kelvin probe force microscopy. They began by developing a theory describing the mechanism of the atomic resolution of the Kelvin probe, which allowed them to optimize the experimental conditions for imaging sigma-holes. The subsequent combination of experimental measurements and advanced quantum chemical methods resulted in a remarkable breakthrough – the first experimental visualization of an inhomogeneous electron density charge distribution, i.e. a sigma-hole – and the definitive confirmation of the concept of halogen bonds.

“We improved the sensitivity of our Kelvin probe force microscopy by functionalizing the tip probe with a single xenon atom, which allowed us to visualize the inhomogeneous charge distribution in a bromine atom within a molecule of brominated tetraphenylmethane, that is, a sigma-hole in real space, and confirm the theoretical prediction,” says Bruno de la Torre of CATRIN and FZU.

“When I saw the sigma-hole for the first time, I was certainly skeptical, because it implied that we had overcome the resolution limit of the microscopes down to the subatomic level. Once I had accepted that, I felt both proud of our contribution in pushing the limits of the experiment and pleased to have opened a path for other researchers to go further and apply this knowledge in discovering new effects at the single-atom level,” adds de la Torre.

According to the scientists, the ability to image an inhomogeneous electron density charge distribution on individual atoms will, among other things, lead to a better understanding of the reactivity of individual molecules and the reason for the arrangement of various molecular structures. “I think it’s safe to say that imaging with subatomic resolution is going to have an impact on various fields of science, including chemistry, physics, and biology,” says Jelínek.

“I’ve studied noncovalent interactions all my life, and it gives me great satisfaction that we can now observe something that previously we could “see” only in theory and that the experimental measurements precisely confirm our theoretical premise of the existence and shape of the sigma-hole. It will allow us to better understand these interactions and interpret them,” says computational chemist Pavel Hobza of IOCB Prague, who performed the advanced quantum chemical calculations on the supercomputers at IT4Inovations in Ostrava. “What we’re seeing is that halogen bonds and noncovalent interactions in general play a dominant role not only in biology but also in materials science. That makes our current paper in Science all the more important,” adds Hobza.

The characteristic shape of the sigma-hole is formed by a positively charged crown surrounded by a belt of negative electron density. This inhomogeneous charge distribution leads to the formation of a halogen bond, which plays a key role in, among other things, supramolecular chemistry, including molecular crystal engineering, and in biological systems.

A precise knowledge of the electron charge distribution on atoms is necessary for an understanding of the interactions between individual atoms and molecules, including chemical reactions. Thus, the new imaging method opens the door to refinement of the material and structural properties of many physical, biological, and chemical systems affecting everyday life. 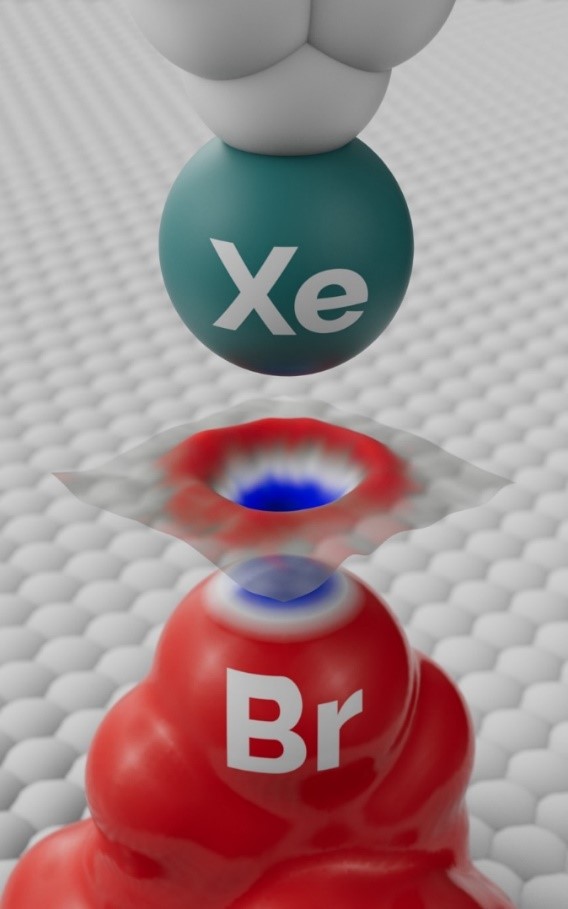 Schematic view showing the principle of the experiment that made it possible to visualize the sigma-hole on a bromine (Br) atom in a molecule using a specially modified tip of a scanning microscope functionalized with a single xenon (Xe) atom. Top: schematic view of the tip of the scanning microscope with single xenon (Xe) atom. Center: an experimental illustration of the sigma-hole acquired by means of a scanning microscope using the Kelvin probe principle. Bottom: electrostatic potential map depicting the sigma-hole (inhomogeneous atomic charge distribution on a bromine atom), which is formed by a positive charge on top of the atom (blue crown) surrounded by a negative electron plume (red field).