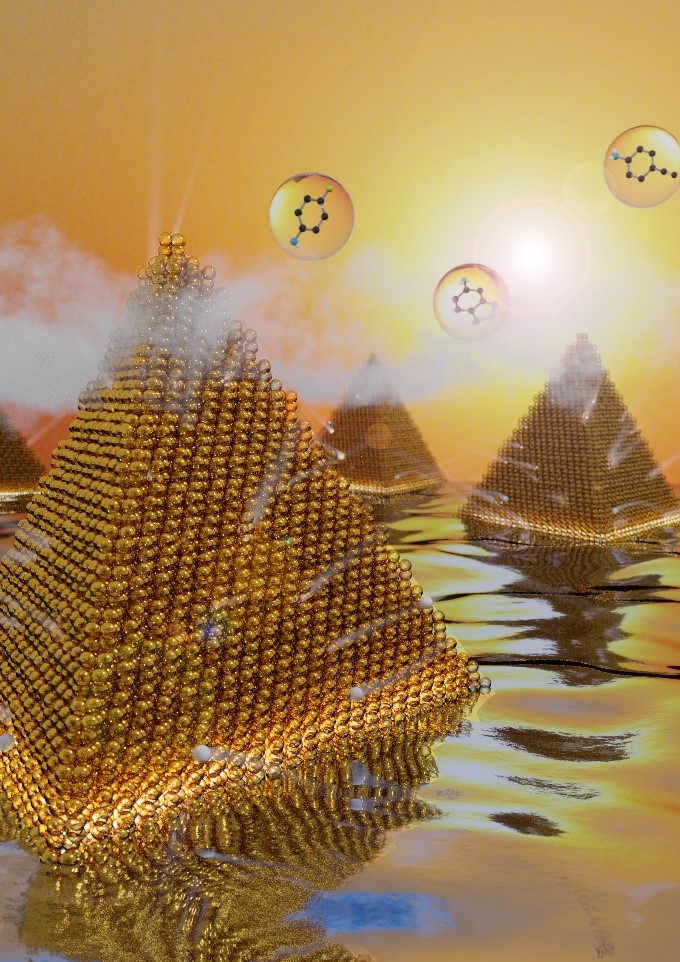 The sun instead of electric furnaces and a cheap nanomaterial instead of gold. This is, in a nutshell, the fundamental principle behind a new process that can speed up and make cheaper the production of a wide range of pharmaceuticals, chemicals, plastics, or dyes.

The technology, which also brings a significant reduction in energy costs and is thus a strong response to the current energy crisis, is based on a nanomaterial newly developed by scientists from the Czech Advanced Technology and Research Institute (CATRIN) of Palacký University Olomouc and the Centre of Energy and Environmental Technologies (CEET) of VSB-TUO, in cooperation with colleagues in Greece and Germany. The composition of the nanomaterial resembles common, naturally occurring minerals, yet it can replace noble metals used so far. Potential investors have already expressed their interest in the material. The discovery was recently published in the Nature Nanotechnology journal.1

“In the current geopolitical situation and the related energy crisis, the European Union has no choice but to look for ways to reduce the costs of industrial production and to make maximum use of new green technologies enabling to end our dependence on energy and raw material resources from Russia,” said Radek Zbořil, the Scientific Director of CATRIN-RCPTM and Head of Materials-Environmental Laboratory at CEET.

A team of Czech researchers, alongside colleagues from the scientific institute FORTH in Heraklion, Greece, and the Leibniz Institute for Catalysis in Rostock, Germany, studied the chemical production processes of aniline compounds, which are widely used in the production of pharmaceuticals, plastics, dyes, and agrochemicals. According to data from MarketWatch, the market for aniline compounds is approximately $12 billion per year, with a significant increase on the way. However, their current industrial production is a very costly process, energetically and financially, as it takes place under high temperatures and pressures, and the acceleration of the chemical reaction requires the use of noble metals such as gold, palladium, or platinum.

“The new technology works with chalcopyrite nanoparticles, a common iron-, copper-, and sulfur-based mineral found not only in the Czech Republic but also in many other locations in Europe, America, and Africa. This nanomaterial is cheap, can be easily produced on an industrial scale, and accelerates chemical reactions more efficiently than the mentioned noble metals, only using solar radiation,” said Zbořil, describing the advantages of the new technology.

The nanomaterial acts as a so-called plasmonic catalyst. This means that it exhibits a number of unique properties when interacting with sunlight. “Sunlight irradiation induces a cascade of chemical processes in the nanomaterial, with some electrons moving to the surface of the material or even leaving its structure. These ‘hot electrons’ very effectively activate chemicals that enter industrial production. Simultaneously, the temperature in the immediate surroundings of the nanomaterial increases, which also contributes significantly to the acceleration of the chemical reaction,” clarified the nature of the functioning of the nanomaterial Aristeidis Bakandritsos, one of the corresponding authors based in CATRIN Olomouc and CEET Ostrava.

The researchers compared the efficiency of the new system with dozens of commercial materials as well as with recently published catalysts, and observed great results. “The production rate relative to the price of the material is an order of magnitude higher than that of the best competing technologies. Experimentally and theoretically, we have demonstrated that this high efficiency relates to, among other things, the electron structure of the nanomaterial, which harmonically matches the electron structure of other components of the reaction,” added Bakandritsos.

The work of Professor Zbořil's research team has capitalized upon the recent discovery of a catalyst deploying iron nanoparticles and showing high efficiency in related processes of pharmaceutical and chemical production, which was published by the Czech-German team in the journal Nature Catalysis at the beginning of the year.2 “The new plasmonic material operates on a different principle and has, in our opinion, greater commercial potential, including a dramatic reduction in energy costs, record efficiency, easy and cheap production, and an elegant technological solution. Therefore, before publishing our research results, we decided to protect the technology with an international patent application. This was the right step, and we are already negotiating industrial applications of the technology with potential investors, especially in Germany,” concluded Zbořil.